Unlike equal pay, which refers to paying a man and a woman the same amount for the same, or similar work, a pay gap is the difference in average pay between men and women in an organisation in a specific time period. It is the result of gender imbalance – having more women in junior roles or fewer women in senior roles, relative to men. This means having a pay gap is likely to persist until organisations have a balanced representation of men and women at every level – something we are passionate about addressing. We are confident, however, that men and women are paid equally for doing the same job at Adare.

At Adare SEC we’re committed to creating an inclusive and diverse workforce. We aim to make sure people are treated equally at work, across all levels and locations, and we value the contribution that everyone makes for us, regardless of their background.

Adare’s mean gender pay gap has largely remained the same since we lasted reported increasing from 17.7% to 17.8%. The median gender pay gap has reduced from 20.7% to 20.1%. The slight changes in our mean and median figures is likely to be as a result a strong years performance with regards to attrition and very little change in headcount from the turn of the year due to the pandemic. We still have a significantly larger proportion of women in our more semi-skilled operational roles who also are more likely to work on a part time basis in some areas, we have seen a reduction in the number of females in more middle management level roles therefore our female middle quartile has reduced from 28.85% to 23% in April 2020 reporting (Upper Middle Quartile). Our Upper Middle Male quartile has also increased largely due to an increase in our Tech management team which has been predominantly males.

The charts below show the gender distribution across Adare SEC. 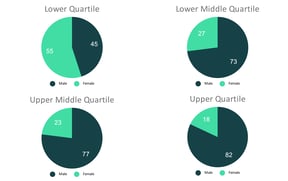 Women have maintained their representation in the higher pay quartiles, however, this has reduced in the Upper Middle quartile due to two significant leavers within our Heads of team from last year’s report and as discussed the increase in management levels within our Tech team that have been taken up by male colleagues.

The majority of our bonus payments are due to an operations attendance and colleague bonus scheme which is equally open to men and women. This explains the median of 0%. However, there are also bonus payments for sales staff (heads have increased in this area over the last 12 months) where there is still a higher proportion of senior men than women which affects the gender pay gap, giving a mean bonus pay increase based on last years figures. 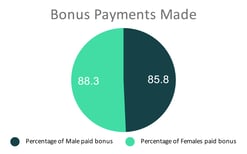 Here at Adare we are continually working towards addressing any gender pay gap imbalances through our diverse methods of recruitment. Recruitment and Selection training has been given to managers to remove any potential unconscious bias to ensure recruitment is based on the appropriate competencies for the required role. This is further supported through our annual review of all policies including our Recruitment and Vetting policy.

Levelling the playing field by creating a culture where those with diverse views thrive. Role modelled from the top of the company, the message is re-enforced that creating an inclusive culture is everyone’s responsibility. We are also looking at reviewing all policies and practices to make sure they operate in an inclusive way for all, including looking at improvements to our family leave policy in the over the next 12 months.

Finally, in addition to the above we are beginning to look at developing a detailed succession planning strategy across the business over the next 12 months to identify top talent within the business and helping develop those who wish to be developed.

Addressing the disparity in gender representation at all levels will take time but it is hoped that with the role out of new initiatives as above this will help to close the gender pay gap at Adare.